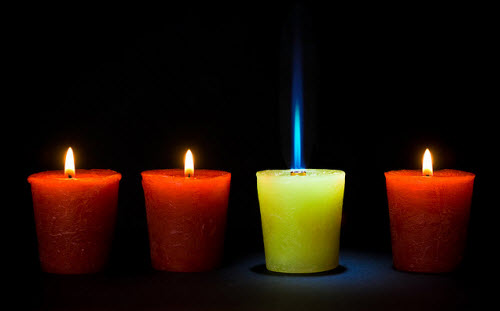 Candles have become a popular part of modern wedding ceremonies, with the most popular being the Unity Candle rite. The Unity ceremony cannot be traced back to ancient traditions and is not a part of any religious tradition that can be pinpointed.

Its use in wedding ceremonies is approximately 30-50 years old, depending on who you talk to and is apparently most popular in the United States. While the ceremony, itself, is simple, its use can be a particularly beautiful way to draw the families and friends closer to the bride and groom.

The Unity Candle ceremony uses three decorated candles, two tapers and a large pillar in the center of the tapers. The color is usually white, but some brides have ordered candles that complement their wedding colors. Others have decorated the Unity Candle, the large pillar, with a copy of the wedding invitation or a picture of the couple. Flowers or strands of white pearls have also been used to create personal candles for the ceremony.

The symbolism behind that simple ceremony represents the permanent merging of the bride and groom into one family. If the couple blows out the two tapers after lighting the Unity Candle, it symbolizes leaving their families and starting a new family together. If they don’t blow out the tapers, it has been said to symbolize continuing love for the couple from each family.

One beautiful variation of the simple candle ceremony involves all the guests and is a beautiful representation of the love and support that friends and family feel for the couple, their unity. A candle is given to each guest as they are seated. At the start of the ceremony, the first guest’s candle is lit and the flame is passed on to each guest in turn until all candles are lit. When the last guest’s candle is lit, the bride and groom light their Unity Candle.

This ritual is particularly beautiful because it makes every guest an actual part of the ceremony and not just observers. The backdrop of flickering candles while the couple recite their vows is truly something that will be remembered by everyone in the chapel that day. Candles draw people together and this Unity Candle Service is designed to do just that.

One thing to keep in mind, however, is that some churches do not allow this
ceremony to be part of their service. Be sure to check with the church or
chapel before you book it for your wedding.

Many brides decorate their own Unity Candles and others purchase them from stores or candle makers. Some have elaborate setups, including a candelabra that elevates the pillar, symbolizing the strength of the new union. The candles can be simple or highly decorated or molded into meaningful shapes, depending on your tastes.

Adding the Unity Candle to a wedding ceremony is a special way to bring the families and friends of the bride and groom closer together on this special day.

This entry was posted on Thursday, July 26th, 2012 and is filed under Wedding Planning Ideas. You can follow any responses to this entry through the RSS 2.0 feed. You can leave a response, or trackback from your own site.