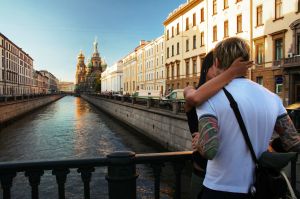 I was taking the subway a moment ago and saw a public display of intense affection.

Notice I use the word “intense”.

The boyfriend was hugging the girlfriend so tightly from behind, literally smelling her and groping her breasts in the midst of a crowd.

They were too busy till they didn’t notice at least twenty pairs of eyes were on them.

In Singapore, there was a big news earlier this year or the last (I can’t remember) when a student couple from a local polytechnic started the circulation of the video named Tammy. In fact, I think that was her name.

A short video of them having hot sex was circulated controllably like bushfire starting from within the school compound to the whole of internet world. They were filming themselves having sex in a room and the amateur video was done using their mobile phone.

When lovers are blinded by relationship, this is one of the common things that may happen.

It really amazed me how wildly and blindly in love can today teens be in and they can do anything, almost anything to express their love for each other.

I know of this common tag line by boyfriends on their girlfriends “If you don’t want to have sex with me means you don’t love me.”

This is when the avalanche of problems set in. Parent is in fact the best person to educate her daughters to respect their bodies. And if the guys love them, they will wait for you no matter what.

On the contrary when the relationship starts to fall apart, women as well as men can do really hurting stuff just to kill and exterminate each other from the surface of the earth.

There are news from simple things like hurling verbal abuse to physical assault and even to murder committed due to betrayal. News like acid-pouring on the ex-wife’s face are common too.

So meaning love can bring hope as well as destroy hope.

It is indeed scary, isn’t it?

Similarly to wedding, the couples were very excited at the onset of planning their wedding, especially just right after their proposals.

“Finally, I’m getting married.” The bride may share with all her friends.

However, suddenly she also realised that she needs to commit to the wedding, and her new famiy and also tolerate her new parents-in-law. Similarly, the groom needs to help too in giving her support and understanding her “non-sensical” bahaviour at times and also endure the ridiculous remarks from his mother-in-law.

Thus, there is more to wedding-planning than meets the eye and some may cancel their weddings just before their wedding day.

So, are you prepared for your wedding aftermath?

How useful or interesting is this post to you? Do share with me in the comments or discuss this in our Romance-Fire Wedding Forums.

This entry was posted on Wednesday, August 29th, 2007 and is filed under Marriage Relationship Advice. You can follow any responses to this entry through the RSS 2.0 feed. You can leave a response, or trackback from your own site.