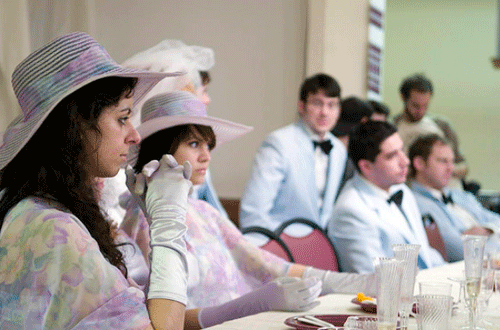 America is truly a melting pot of people from every country in the world, mostly from Europe. Along with the influx of immigrants over the centuries, came wedding traditions and superstitions that endure today.

From the Victorian weddings comes the old saying: “Something old, something new, something borrowed, something blue.” Family heirlooms, like a bride’s mother’s earrings or necklace are traditionally worn for the ceremony as “something old.” Some bride’s carry their grandmother’s Rosary beads or silver cross. Obviously the “something new” would be the bride’s dress.

Friends or relatives would be happy to lend the bride something to fill the traditional requirement for “something borrowed.” The actual borrowed item can be anything the bride wants it to be, usually a tiara or special hair decoration. And the “something blue” has been focused on the blue garter that the groom removes and tosses to the crowd of guests.

The ancient belief about the color blue stems from a Victorian connection to the Virgin Mary and a belief in the purity of the bride. During the Victorian era, brides would often decorate their wedding gowns with blue satin ribbon or wrap their bouquets with blue ribbons. Even if it isn’t visible, some brides will have a small piece of blue cloth or piece of jewelry tucked into their garments.

The ancient tradition of tossing rice at the newly married couple as they are leaving the ceremony, is believed today to only represent an ancient wish for fertility, along with prosperity and long life. There is a lot more than that behind this simple act.
The practice is centuries old, dating back to both the Roman Empire and to some primitive tribal cultures.

Primitive marriage ceremonies bound the couple together when they ate rice together at a meal. A more colorful primitive use of rice at a marriage was to feed uninvited evil spirits who always were invisible guests at ceremonies so they would leave the happy couple alone.

In the Roman Empire, wheat was the symbol for fertility and the bride carried a “bouquet” of wheat or garland of wheat in her hair to show her virginity. In a reverse of today’s traditional toss of the wedding bouquet, the wedding guests tossing grains of wheat at the bride. Young girls would grab the grains that bounced off the bride, believing the grains would guarantee a wedding of their own soon.

The wedding veil has a lot of history behind it, including to help dispel evil spirits before the ceremony. The same could be said for the bridesmaids that decorate any fancy wedding ceremony today. Apparently, ancient evil spirits were easily confused and surrounding the bride with several ladies would make it difficult for those spirits to determine which one was the bride.

In political marriages that joined two families together for protection or to increase political power and standing, the couples normally didn’t see each other prior to the arranged marriage. The veil kept the bride’s looks concealed from the groom until the ceremony was at a close and he lifted the veil off her face. That’s when he discovered who he had just married and the bride’s homeliness was not a prior consideration.

Almost any rite practiced today has roots dating back several centuries. Today’s wedding ceremonies are full of ancient superstitions and legendary beliefs that have been forgotten over the centuries.

This entry was posted on Tuesday, August 30th, 2011 and is filed under Wedding Planning Advice. You can follow any responses to this entry through the RSS 2.0 feed. You can leave a response, or trackback from your own site.