The History of the Wedding Ring 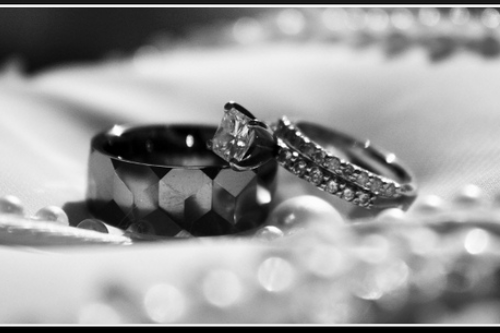 If there is one wedding symbol that we can all recognize, it is the wedding ring. The wedding ring has, for as long as we have known it, been the longstanding symbol of love between a man and a woman. It stands for undying love and eternal affection. This isn’t just an idea to incorporate a form of jewelry into the wedding ceremony; wedding rings have a long and rich history behind them, coming from different areas and early cultures of the world.

One of the early cultures to go into the practice and tradition of wearing rings were the early Egyptians. Their wedding rings were made out of the reeds from the river Nile. They plaited and twisted the reeds into rings and bracelets from the river they held in high esteem. This is what they believed to be the bringer of all their fortune and life and they symbolized their love using what the river had given them.

The early Romans of 332 B.C. also carried the practice of wedding rings. While Egyptians had used plants, the Romans used iron to symbolize man’s strength in the bond he and the woman shared. It also symbolized the groom’s goodwill. The Romans wore the ring on the third finger of their left hand in the belief that the vein of that finger travels directly to the heart. They called it the “vena amoris” or “the vein of love”.

Early Pagan practices have also been thought to play a part in the tradition of the wedding ring. In their early culture, the man was said to circle a likely bride with rope in order for her spirit to remain under his command. This was a form of betrothal. Early Christians who discarded Pagan customs continued the practice of using betrothal rings. Wedding rings continued to evolve through time: the 13th century saw the emergence of the engagement ring (for the period of waiting from betrothal to marriage); the 16th century Puritans gave birth to wedding thimbles, who thought rings to be materialistic and frivolous; the 20th century saw soldiers exchanging rings with their wives in order to be reminded of them in their long separation.

Now, the wedding ring is a crucial part of the wedding ceremony. We look at it as the symbol of love everlasting – no beginning and no end. Whatever the material used – whether it is gold or silver, set with stones or not – the wedding ring stands for the same thing. We carry on the practice of giving rings as a way of finalizing the vows we took and bonds we commit to and with that, it is a lovely tradition we won’t soon do without.

This entry was posted on Wednesday, June 15th, 2011 and is filed under Wedding Jewelry. You can follow any responses to this entry through the RSS 2.0 feed. You can leave a response, or trackback from your own site.