“Hi JR, I am also considering to have my wedding banquet at Holiday Inn Park View. What are your comments abt the food, svc etc?”

“When I come to think about it, I have not really blogged a proper post on the feedback on the hotel.

My first contact with HIPV was Pauline. She was quite friendly to me. However, my cousin who accompanied me when we were going to sign the contract found her to be arrogant and snobbish. My cousin was very helpful as she tried very hard to get more free perks for me.

A few months later, Shue, the new coordinator took over, telling us Pauline had quitted. We met Shue thrice to discuss the wedding details such as how we wanted the table layout, the stage layout, wedding favors to choose from etc.

The last contact with Shue was when she handed us the wedding cards.

Not long later, when we emailed Shue, another lady Vanitha replied saying thta Shue had taken “unpaid leave” to study. But I found out on the forum that another coordinator told other brides that she had left. The Director had left too.

We were shocked as it was a few weeks just before our wedding.

The new cooridinator was more coorperative and responsive. She was more accomodating and threw in whatever perks she could offer…Free bottle of wine in the bridal suite, free corkages for 10 more bottles of wine from the previous 5, 2 guest books instead one for sourvenir…

Both me and my wife, though was glad that Vanitha was more accomodating that the previous two, but before that we were really unhappy that she only contacted us afer we emailed Shue.

We brought this matter to the Director but only to realise she had quitted. Then, there was an acting Director who took over and he was initally quite rude that we give them this feedback about that poor service in taking care of their customers. But he wanted to close the matter and he gave us 2 helpers’ room instead of one and free corkages for 40 bottles of wine.

The food-tasting was coordinated by Shue and the food was above average. It was edible. But according to Hong Kong custom, the dishes were not colorful enough and so we changed quite a number of dishes.

Frankly speaking on the wedding dinner, I was not sure about the taste of the food as we were being dragged along with the flow of wedding dinner. We only managed to eat about 3 dishes.

I had the Banquet Coordinator who was extremely friendly and he was very gung-ho. He was an Indian from India and he told us that our wedding would be his last one he was coordinating. 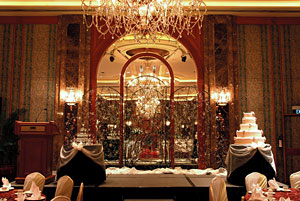 So, we could see he did his best and he gave us ample time and notice for changing. He initated a meeting among groom, Mcs and my very own banquet IC and groomsman. I must say he was really experienced in interacting and explaining the details to us.

I remembered he said that it was our show and there was no need for us to worry. He would be there to guide us and assist us. It was assurance that he gave.

But he had left and was working in another Indian restaurant just beside the Orchid Ballroom.

For service, I could only comment about the service of the server at our VIP table. I could say we were well-taken care of.

On our wedding night, there was another manager who took care of us, instead of one. So, I’m glad that the service for our wedding was very good.”

This entry was posted on Thursday, April 12th, 2007 and is filed under Wedding Venues. You can follow any responses to this entry through the RSS 2.0 feed. You can leave a response, or trackback from your own site.